Interested in learning more about the crew that makes up Paradise Lanes?
You've come to the right place.... 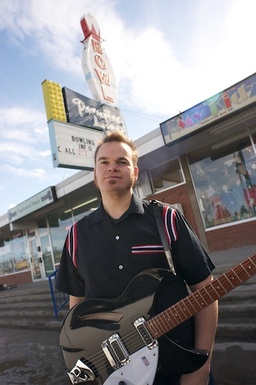 ﻿Rich Panteluk - Vox / Rhythm Guitar
﻿
Raised on a steady diet of great 60's beat and vocal group records, Rich was an obsessed music fan and singer from a ridiculously early age.  After consuming and wearing out his father's record collection he started amassing his own diverse rock and pop music collection, which has now reached epic proportions.

A veteran busker in Calgary for well over 20 years, Rich got his start singing and playing a snare drum with an office desk bell as a cymbal in a busking duo.  After a few years, he moved over to playing rhythm guitar and hasn't looked back.  A driven street performer who played often and everywhere in Calgary and all over Canada, his busking adventures have taken him to New York, Los Angeles, London, Edinburgh, Dublin, Amsterdam and Prague to name but a few.

Rich spent time in the 1990's and early 2000's writing songs, singing and playing guitar in original bands around Calgary as well as being the musical director of a theatre company.

Rich is a singer's singer who is in his element arranging and singing harmonies.  While he handles the lion's share of the lead vocals in Paradise Lanes, he is just as happy singing background harmonies and banging out chords on rhythm guitar.  He is always looking forward to getting together with the good gents of Paradise Lanes for the next rehearsal or gig! 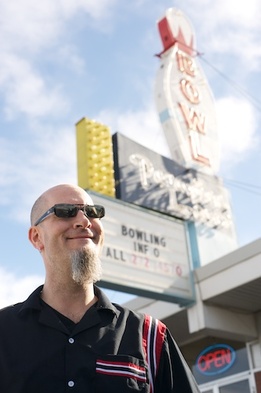 Seán is the rhythm and groove-keeper for Paradise Lanes, singing leads and harmonies from behind the drumkit. Singing since he could find the words to the melodies he'd been humming, Seán was trained in school choirs from age 7-11, and devoured all music from his older family members through his junior high years.

Putting his sticks to the skins since he was 15, Seán has provided the backbeat to other Calgary bands such as The Hot O'Malley's, One Tribe, Public Matter, Roscoe Pecoe, as well as audio recordings for Paradise Lanes, Mel Smith, the Buccaneers, and Jessica Erlendson. Though he sits near the back, Seán stands out as any of the frontmen in Paradise Lanes.

Seán also plays Guitar, Bodhran and sings with other Calgary acts Staggered Pints and Wild Roses. He has also released an independent 5 song EP, that was recorded live at the Schloss Heidegg (Heidegg Castle) in Gelfingen, Switzerland.

He has also been teaching Guitar since '06, with Calgary Contemporary School of Music and Irene Besse Academy. He has continued teaching independently for the past 4 years. 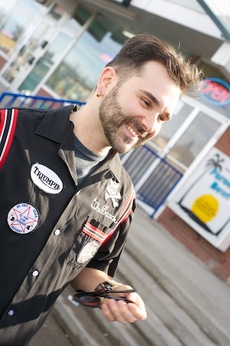 Jaime is originally from St. John's, Newfoundland. He started his musical journey playing french horn and trombone throughout school.

In 1996, while living in Korea, a trip to the Samick instrument factory changed his musical perspective. It was here he found bass guitar. He's never looked back. With a wide range of band experiences under his belt which include, country bands, funk bands, recording and video credits, nothing gets him fired up like live music.

You'll often see Jaime dancing with the crowd, while layin' down sock-rockin-funk-flyin-cosmic-stew-slappin'-pluckin-sometimes-punchin the beat on his Rickenbacker, uBass, 1975 Fender Jazz, Yamaha BB Jazz, or Fender P-Bass. Scratch him behind the ear and he'll love you for life. 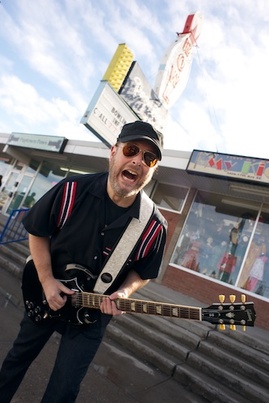 Andy began playing guitar, with keen interest, at a very young age. Having been influenced by the guitar driven bands like CCR, the Ventures, Rolling Stones and the like, he began the pursuit of more things guitar; heavy metal and rock bands of the 80's formed a foundation for the years to come. Hours upon hours were spent dissecting songs and solos note for note. Nothing was right unless it was perfect.

Andy attended the Musicians Institute (G.I.T.) in Hollywood California where he played and performed with some of the world's top guitar players and musicians.

Returning to Calgary, Andy opened and operated The Guitar Connection for the next 17 years, passing on his technical guitar prowess to hundreds and hundreds of students. All of this while performing in many bands covering various roles.

Enter Paradise Lanes, where Andy and the merry-motley-bunch now blend their talents the best they can to amaze and entertain you!